“Denverites, in less than nine months, you’ll be voting for your next mayor and possibly deciding your next city council representative. With federal and state midterms on the way, it’s still pretty early.

Still, citywide candidates who’ve officially kicked off campaigns had their first deadline to file fundraising numbers last week. We’ve got your first look at what’s coming – and we’ll be at it until the dust settles next year.

One caveat: Denver’s elections division told us some candidates have already filed amendments, so dollar amounts will fluctuate later on. They can file amendments at any time, so all finance numbers will be fluid until the election is over.

You can check out our comprehensive dataset here, or see individual donations and up-to-date info at Denver Elections’ new data portal. The charts on this page will update with each filing deadline.
.
.
.
.
The second-most funded race is for District 9, but it’s mostly one challenger whose purse pushed the race to that level. Darrell Watson, who’s been involved in city committees under Mayor Hancock’s administration, has so far raised $51,000 to try to unseat CdeBaca. His funding consists of 75 percent of all money invested in the race so far. Kwon Atlas, who’s raised less than CdeBaca so far, also has ties to Hancock.” 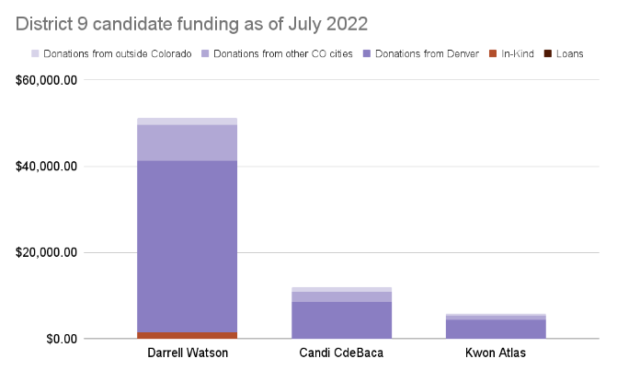